Small Sleeping Saint Joseph statues are available by calling or sending an email to the parish office. 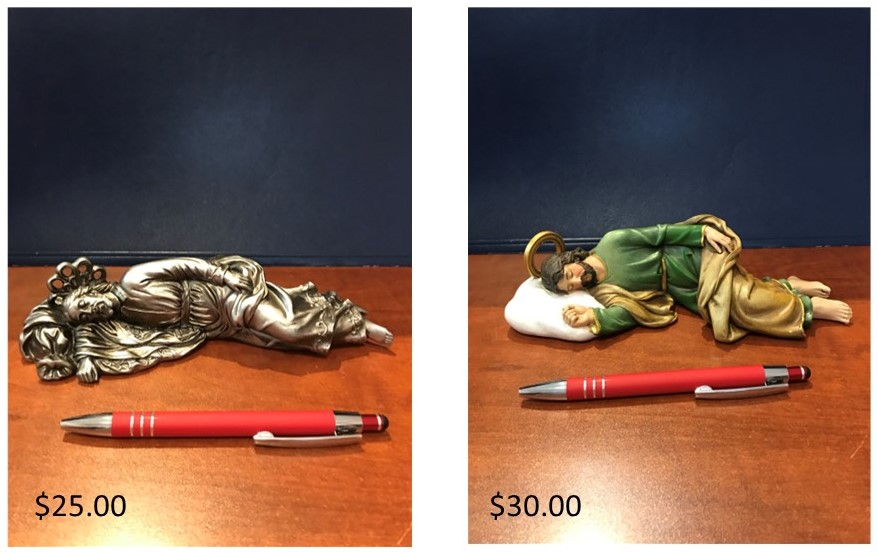 The human and religious history of Jorge Mario Bergoglio, the future Pope Francis, has been linked from the outset to a particular figure dear to Christians all around the world: that of St. Joseph. A thin connection, made of often fortuitous coincidences and a chain of small and large pieces that can, over time, create an extraordinarily vivid design with strong symbolism.

It is in the San Jose Buenos Aires church in 1953 that seventeen-year-old Jorge Mario Bergoglio discovers his vocation and decreed his desire to dedicate his life to God and mankind. So many years later, on the day of St. Joseph, March 19, 2013, that this boy became a man is devoted to the role of the Pontiff and Father of the Church.

Pope Francis had a long, arduous journey which he faced with courage, determination and optimism. It is journey that he has not undertaken alone.

Pope Francis wanted St. Joseph with him, a good guide, a silent but attentive protector. Even today, in the private study of the Pope at Casa Santa Marta, there are two statues depicting the saint. One in particular is very dear to the Pope and has accompanied him since his life in the College Maximo San Miguel where he was rector. It is an unusual image for us, but very common among the Latin American faithful: a statue of St. Joseph sleeping.

The Pope wanted it with him when he moved to Italy from Argentina. It is a wooden statue, simple in the same way as the man depicted was himself, wrapped in his humble and true red robes. Yet the symbolic value of this picture is great. When sleeping, Joseph receives the messages of God who warned him of the danger posed by King Herod, and advises him to love and protect Mary and the Child. It is in this dream that Joseph takes on his putative role of Father of Jesus and of all people, an archetypal figure, protector, defender, comforter. Joseph is the careful and tender guardian of the family, the man, who welcomes and guards the mysteries of God, as he has consciously chosen to accept and protect Maria, the woman that God willed to be the holy and immaculate mother of his only Son . Joseph is the archetype of the Christian bishop, father and protector of the Church and all men and women who make it up.

This is why the Pope has the habit of putting cards under the statue of the sleeping saint that contain problems, requests for grace, and prayers of the faithful. It's like inviting Joseph to 'sleep on it', and perhaps put in a word to God to solve difficult situations and help the needy, thus renewing his role as the merciful and protective father to those he loves.

"I also want to tell you something very personal. I really like St. Joseph, because he is a strong and silent man. On my desk I have a picture of St. Joseph sleeping. And while he's sleeping, he takes care of the Church! Yup!

He can do it, we know that. And when I have a problem, a difficulty, I write a piece of paper and put it under St. Joseph, because he dreams about it!

This gesture means: pray for this problem! "

This is what Francesco said on the January 16, 2015 to the families gathered in the Mall of Asia Arena in Manila. It was a very beautiful scene of simple and profound devotion which has prompted many faithful Italians to follow the example of the Pope and to put a statue of St. Joseph sleeping in their house. He is a really special saint that protects and even helps while he is sleeping!